I'm sorry about Update 1 - apparently every time the television computer told me there was an error with posting... it actually went through. I've fixed it and gotten rid of all the excess posting...

I'm waiting for our sheets to get done washing right now, and then I'm going to hit the sack while they dry. I want them to be clean for John when he comes home - so I'll put them on the bed in the morning, and just curl up on the mattress pad with a blanket. (Yes, I am THAT tired!)

Since the words aren't coming to me at this point... here are some pictures from today. 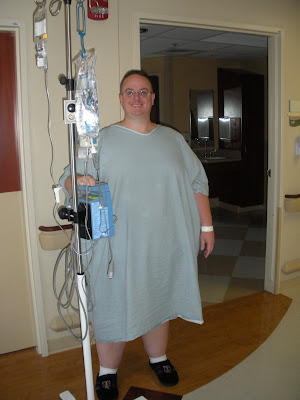 Here is the patient on one of our walks... he is doing amazingly well! He walks a little farther every time, and has walked every two hours like clock work. I'm so proud of him! One one walk though - well on all of them... we pass through the labor and delivery area. We walked by one room as a nurse entered and was asking the people inside if "there is a head yet" - EWWWW - I sort of sped up the walking for that moment to get out of that hallway. The nurses are really thrilled about the amount John is walking... and if I know him - he'll get himself up if he's awake and walk tonight while I'm here snoozing. 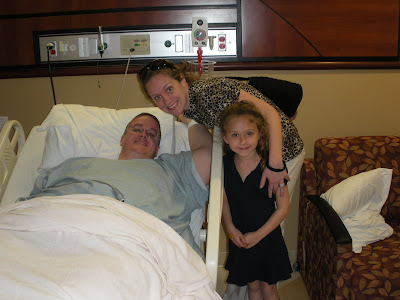 This is John's sister, Susan and our niece Taylor visiting this evening... they were my saviors when we found out that the cafeteria was closed around 6:30 tonight. They ran out and got me dinner from Panda Express... which incidentally wasn't good at all... so now I know that I'm not missing ANYTHING there. I'll stick to other forms of Asian food for my dieting pleasure. 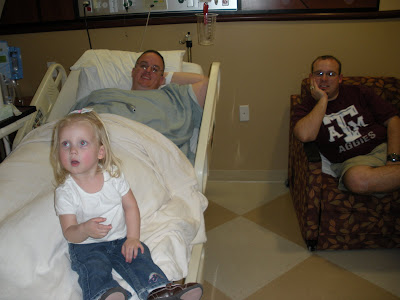 Renee, K and their daughter L came back to visit again this evening - L had to test out the bed with John... and she's just been so cute all day. When they left earlier this afternoon she just looked so worried about John - at that point he was still pretty groggy. So it was good for her to bring him a picture tonight and see how excited he was about it. It's funny how attached she is to him... the whole time he was in surgery - she'd look at us and ask when she could see "Her Mr. John" - I just love this adorable kiddo! 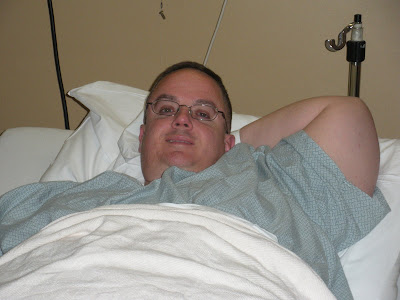 This actually was the first picture I took of John this afternoon - and honestly his face looks a little swollen to me, but I think it was from the tube being in his throat and the fact that his mouth is so incredibly dry. The poor guy is such a camel... I mean he just sucks down the fluids throughout the day... and the hardest thing on him right now is not being able to have any fluids until after his x-ray in the morning. Thank God for the swabs that they've been giving him to wipe around in his mouth - and brushing his teeth each time he walks seems to be helping him too. At least he can rinse his mouth out... he can't swallow any of the water - but I'm sure that it makes him feel better to get some water in there anyway.

That's about it for us tonight - I updated his ticker based on his starting weight at the doctor's office - I don't want to make the ticker any lower - but I know they told me his starting weight - but the last number I heard him give me doesn't quite jive with the weight loss total that the doctor told us today. I'll get it sorted out tomorrow - but what the doctor says is that he's lost 26 pounds since his initial consultation... and 19 of those pounds has been in the last week - since he's been on the liquid diet. He's done amazing!
He was so cute tonight - on one of our walks... it's been typically just the two of us going on those... he asked me if I thought the doctor would use him in his promotional materials if he did well enough on his weight loss. I think that John is absolutely capable of being that poster patient... he's determined, and I know that the sky is the limit when he sets his mind to something. He's already aiming high for his 3 month goal... and I have a feeling that if today is an indication of things to come - this guy is about to become a workout machine! If he can jump out of bed and walk longer and farther each time... and honestly - MY feet hurt after our 3 or 4 walks this evening... (by the way - hiking boots... not a smart plan if you're going to spent a lot of time on your feet... just sayin) he's going to spend lots of time working out... I'm just glad I've got a month on him in terms of getting my cardio going!
Off to bed now - as I'm going to be back at the hospital in the morning between 6:30 and 7... Starbucks in hand... I know I'm trying to quit, but this is not the week. My hot tea stuff arrived today - so I'll be starting the testing and getting used to that this weekend! I'm so excited. I have 12 different flavors of tea to try out over the next few weeks!
Posted by Kim H. at 10:24 PM
Email ThisBlogThis!Share to TwitterShare to FacebookShare to Pinterest
Labels: John's Journey