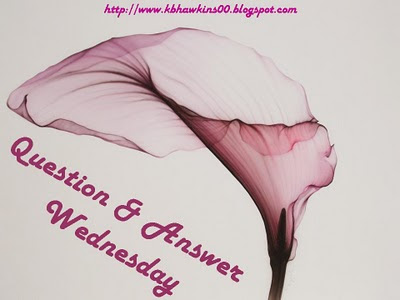 My heart really isn't in this, but I promised... so I'm intent on keeping that promise. An otherwise okay day - ended on a couple of REALLY sour notes... so I'm in retreat mode again... and headed to lay in a bubble bath after this - or I might just take my medicine and go to bed. Either way - not the ending to the day that I anticipated.

So without further delay...

What is your favorite childhood memory?


My favorite childhood memory... hmmm... I don't have any true childhood memories. I have found that I've actually blocked most of my childhood out - I don't remember much before 5th grade. If I had one though - I'd probably choose something where all of the important people in my life were present... which would have happened before I was 7. Most likely it would be a Christmas memory...

What are you most eager to re-experience with your child (favorite book, favorite game, favorite vacation)?

There is so much that I'm eager to experience with a child... but I'd say that there is a laundry list of books (Santa Mouse, The Little Engine that Could, Good Night Moon... and so many others), lots of games (Candy Land & Hungry Hippo... for starters), and on the vacations - I'm not much of a traveler... so I'm not sure on that one. I'd probably say that Washington D.C., NYC, Gatlinburg, and Disney World would be on the list. Other than that, baking... anything relating to Texas A&M... a love of Jesus... and many many more things.


Do you do bible studies? If so, what has been your favorite one?

I'd have to say the Love Dare would be the most memorable study that I've done. I also did one by Beth Moore - the follow up (small white & green cover) to Breaking Free. We did 40 Days of Community by Rick Warren a little over a year ago - which was alright... if you can deal with listening to/watching Rick Warren. We're about to start Growing Kids God's Way with our small group at the end of the month - so I'm sure that one will be really great.

Since I know you make jewelry what is your favorite stone to work with or if you could have any one piece of DREAM jewelry what would that be?

I'm not sure that I have a favorite - I love them all. I really like the natural stones the most though - because of their irregularity. I enjoy having things that are "one of a kind" but at times it makes it hard to recreate things when more than one person wants to have that piece. I am drawn to many of the different stones and crystals... I typically look for things that fit with the season's style - but also speaks to me. I've got a WIDE variety of stones set in different pieces... just check out the link to my Etsy store in the left side bar.

Hmmm...ok so I saw that you mentioned something about you having to go to the doctor for your adoption proceedings. Is it a requirement that be healthy enough or something? I get so frustrated when I teach class after class of pregnant teenagers or teen parents and then think...I might not even be allowed to adopt if I tried and couldn't pass a physical...

We basically just had to get checked and have a form filled out saying that we're healthy enough to have a child placed in our home. There is no reason that you wouldn't be healthy enough to have a child... they are mainly looking for severe mental illnesses and terminal illnesses. If it were found that you had cancer at the time of that physical - they'd put your adoption on hold until you finished treatment... so it's things like that. For the majority of people it is just a formality. I go to the doctor enough that he really just filled in the blanks based on the 3 years of history he has from treating me. Same thing with John... the only things he did other than look through our chart and fill in a few details were doing a urine test and a TB test. We actually did a blood TB test that was drawn on the day I had my initial appointment for my back pain. So don't worry about being healthy enough - believe me - if I'm healthy enough - you would be too!


It is a little mind blowing the things that we have to do to make this happen - but I can understand it to a certain extent. It's just frustrating being people that care enough to follow the letter of everything they've given us - knowing that there are people out there having babies that haven't done a fraction of this stuff to prepare themselves.


Alright folks... that's it for the questions for the week. Don't forget to become one of my Friday Favorites!