You thought that I had some majorly popular video on YouTube with that title, right? Nope... but there is a viable reason for the title... I'll get to it in a minute.

Can I tell ya'll about another new grocery product that I just heard about?! Have you heard of these... 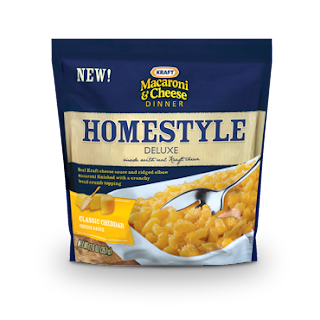 I saw a commercial for this today, and it looks yummy. It's Kraft Macaroni & Cheese that you bake in the oven - and I think it comes with a bread crumb topping... uh...come to Mama! They have three flavors to choose from - Classic Cheddar, Old World Italian with Parmesan and Romano, and Hearty Four Cheese (Parmesan, Asiago, Colby, and Cheddar) - the Kraft website says that it bakes in 20 minutes... so that would be a good easy side dish with a different twist than the yummy powdery cheese goodness that we're used to from Kraft.

Okay - so anyway - back to the reason for the post.

Shortly after I posted yesterday - I got a frantic phone call that I needed to pick up James from the sitter. The call was from John - but our little buddy (and now his parents too) is sick.

It started with a projectile vomit - like beyond spit up and comes out his nose - yesterday morning before we left for work - which has happened once before in James' life... but was nothing... so we just cleaned him up (accidentally not noticing that we should have cleaned up John's black jeans he was wearing for the day too) and went on about our day.

The only other time this has happened - he was about 2 weeks old, and the doctor's office said that if he acted fine - just to feed him like normal and not worry about it. Well, he did it again at about 9:30 or so with Mrs. Amanda, and because he was heaving a bit - she called John. Since I had the car for the day - he called me to go get him because he had a couple of meetings he couldn't miss.

Off I went to pick him up and take him to see the pediatrician... do all pediatricians keep their offices/waiting rooms so warm? WHEW... I was melting! Maybe it won't be so bad when I'm not pregnant... but yikes. She checked James out and even though he hadn't really eaten anything all day - the appointment was at 11:30... and hadn't had any wet diapers... she didn't find anything majorly wrong with him.

He was still good and hydrated, but we determined that he must have some sort of a stomach bug. So she put him on a 24 hour formula restriction - gradually building back up. We were to give him Pedialyte for 24 hours, then do 24 hours of a half formula/half water mix, and then finally we can get him back on a normal diet.

I brought the little guy home to try our first dose of the Pedialyte - and he totally spewed it all over the two of us... then promptly fell asleep. So I let him sleep, and we started him on a 5 ml (1 tsp) syringe of the stuff every 10 minutes... he took two doses and then had another nap... we did work up to him taking 4 ounces of it sometime around bedtime.

We tried starting him on the half/half solution around noon today - and it's been going a little more rough. I think my son has now developed a liking to the grape flavored Pedialyte over his formula... and really, who can blame him... have you smelled that stuff lately? Formula is nasty!

He might have spiked a tiny little fever this evening - so we've given him a dose of baby Tylenol (generic - because of the recall... but deemed safe by our pediatrician) - and we'll try him again at bedtime. Poor guy - when Mommy said she needed a relaxing weekend at home... she didn't mean that it had to be under quarantine!

It looks like I've got a version of this bug - and while I'm not 100% sure - I'd bet that if Daddy doesn't have it yet... it'll happen before the weekend is over. I guess on the bright side - this is a good way to keep my weight down before my appointment on Tuesday with the OB! HAHA!

How is YOUR weekend going? I totally just cracked myself up over the starting of this post with food - and then talking about stomach viruses for the remainder of the post... only I could do that!

One fun thing that happened this weekend is that I'm being featured over on Life with the Dietrich's... so go check Katie out and say Hi!
Posted by Kim H. at 6:23 PM
Email ThisBlogThis!Share to TwitterShare to FacebookShare to Pinterest
Labels: Mommy Diaries