Has another week escaped me mostly undocumented on this little ol' blog? Of course it has, because once a gain - I've been so whipped by teething and pregnancy that I basically haven't even begun to attempt looking at my computer in the evenings. So I thought I'd finish out the week with a little bit of randomness...

1) I'd really love to try some of these Pepperidge Farm Baked Naturals Cheese Crisps - I don't even know why, but they just look so darn yummy to me! I love cheese crisps of any form - so I figure that they'd be a hit with me. 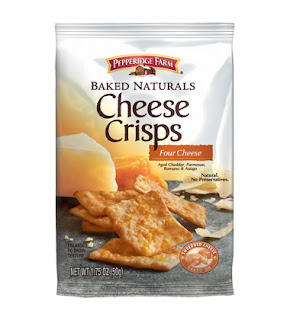 2) Have you heard that Jamba Juice is now putting products in your local grocery store? I'm so thrilled... of course they aren't putting MY favorite in a bag yet - but there is hope... Jamba folks... branch out and do Caribbean Passion next, please?! Currently you can find the flavors of: Razzmatazz, Mango-a-go-go, and Strawberries Wild in the store... all complete with the signature Jamba Juice Antioxidant Boost mixed right in the bag!

3) Had enough of the grocery store run down? HA! I actually found a pretty cool website that will list monthly (or at least they have through June 2010) the new grocery products coming out on the market... and since I'm sort of a junkie for trying new grocery items - I find that to be really fun!

4) Mr. James is growing like crazy - and it looks like he has tooth buds on both sides where his inscisors will go - so he really will be a vampire once this suckers come in. He's doing really well though - and just gets cuter and sweeter everyday. We did an unofficial weigh in on him this week one night before bath time and it looks like he's right about 14 pounds 6 ounces... so he certainly will be ready to start cereal next week after his 4 month doctor's appointment.

I know we'll be ready since he's been waking up at about 3AM every morning for another bottle to tide him over for the night. I guess 7:30PM bedtime to 3AM is a good long stretch of sleep - but when you wake up for work at 4:45... it can be mighty depressing! HA! He's getting so predictable though - at about 6:45 he's ready to start winding down for the day... he gets a little fussy and is ready for his bath routine to start... but then the little stinker doesn't want to drink his bottle because it's like he knows that it'll make him fall asleep - and he would rather fight that. Isn't it funny that even at this young of an age - he instictively knows to fight it - even though he's exhausted!?

We probably could start him on the cerreal sooner - but would rather just wait because we've already talked to the doctor about our worries with him becoming more constipated with changing his diet... and he's already on the edge with that - so we want to know what she recommends to add in to help with that. Likely either mixing in some diluted juice with the cereal - or a little prune, apple or pear juice with another bottle during the day. (I'd opt for the apple or pear...but that's just because the idea of prunes - kills me!)

5) This week has been particularly hard on the pregnancy front for me - I generally haven't felt well at all. I went about 24 hours without eating between Wednesday and Thursday - and have a strong feeling that from here on out... I'll be a one meal a day kind of girl... maybe two if I'm lucky. I just am running out of room and things are crammed so tightly in there that my organs have zero room for anything else. On top of that I've been having a lot of cramping - so I've been timing them and writing each one down since yesterday morning.

For now - I'm having about 2-3 an hour at varying intervals, but should we reach the 4 within an hour mark... we'll be off for a trip to the hospital. I know that I could call my doctor's office, but at this point - I have a good idea of what is more than likely going on... and if anything changes, gets more intense, or gets into a regular pattern - I think that they'll just tell me to monitor it closely as we've been doing.

6) We got some great news yesterday about our birthmother - we are technically not allowed to see her for 6 months after the placement... so we had to tell her about my pregnancy via a letter that I wrote last month. She's had some major things going on in her life - so she just went by the agency to read the letter yesterday... and she's happy for us. It's a relief -  because we were a little worried that she might be upset since she chose us because of the fact that we didn't have other children. I think though that God really gave me the words to explain to her how we feel about it - and hopefully that put her at ease with it.

She also saw a picture of James for the first time - she hasn't wanted to look at them in the past - so that was a big step for her. She is moving back to another state very soon, and won't be here when we'd be able to have our 6 month meeting... so thankfully the wonderful ladies at the agency are going to bend the rules a little for us and let us all see each other before she leaves. We aren't sure if she wants us to bring James to the meeting yet or not, but either way... we'll be thrilled to get to see how she's doing since it's been 4 months since we saw her.

I'd love for her to see James too - and get to see how happy he is... and how happy we are... and maybe even one of his signature million dollar smiles - complete with dimple!

Thankfully she does have family that lives in the area that she will visit from time to time - so hopefully we'll be able to see her that way... since she likely won't be here for the agency's annual picnic in March each year. She's such a wonderful person - and we'd love to see her as often as she is willing and able.

7) It looks like it'll be another low key weekend for us at home - since I haven't been feeling well, we haven't been getting much sleep, and it's just too darn hot to do much of anything else right now. I've got a pile of movies that we can watch... books that I can download on my nook... and of course we have a little man to keep entertained.

I basically want to enjoy a relaxing weekend - with the option of getting up and doing something if I want to... because at this point - with these cramps... who knows what next week will bring - and while bedrest sounds like a vacation at the moment... I can only imagine how big of a TEST that would actually be - since it's not comfortable for me to lay down all night - much less for weeks on end... and entertaining yourself while stationary can be a nightmare after a while - there is only so much television, reading, and internet one can stand before it gets really old. We'll do whatever we have to do of course - for the safety and health of Baby Tyler.

We officially are in the 3rd trimester on every different measuring system now - some have 27 weeks as the beginning of the 3rd, and some have 28... so now I'm in it regardless. We're 2/3 baked... and ready to get the last 1/3 moving quickly. We've started a registry for Tyler this week - which seems silly I know, but it's just in case anyone asks - and for our own shopping so that we can make sure that we get the best deals on the things that we'll need in addition to what we have: like the double stroller, another carseat, a portable swing so that we can have two, and breastfeeding supplies. Other than that - we'll likely add some things that James still needs: like his high chair and stuff like that... because we can get extra discounts by buying it off of a registry - even if it is our own.

I think that's about for it... thank goodness it's Friday!!
Posted by Kim H. at 9:05 AM
Email ThisBlogThis!Share to TwitterShare to FacebookShare to Pinterest
Labels: Mommy Diaries