It's taken me about a week to get this post written. I ran into technical difficulties last week when I started it because apparently - I've run out of space to store photos on this ol' blog of mine... so I had to delete some from old posts or pay for more storage space from Google. I'm thinking that I need to just pay the $5 a year to get more storage space - because I don't want to delete anymore stuff from my blog - that isn't fun at all.

Anyway - last Tuesday, the boys and I went on our first trip to the mall. I just had to take them to see Santa, and had been waiting to take them to Bass Pro Shop because their Santa is free. They allow you to take your own photos as well, but they also gave me copies of the three poses that I wanted. It really is a great set up there - they've got games and crafts for the kids... and of course the free picture & print with Santa rocks too.

I had to laugh though because I wasn't the only Mommy with a baby to think about going here while the big kids were still in school. It was a bunch of Moms with infants - but we didn't have to wait in line at all - we just walked up and got our photo done. Heaven!

So here is what we got - the first three are the photos that the elves took for me. I wanted one of each of the boys separately and then one of them together, but Santa would only hold one baby... so I had to get in on the action. Good thing I thought about it and wondered if this might happen... so I color coordinated. The other two are photos that I got with my own camera. The reindeer were a nice touch, right? 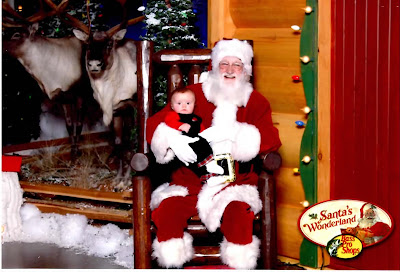 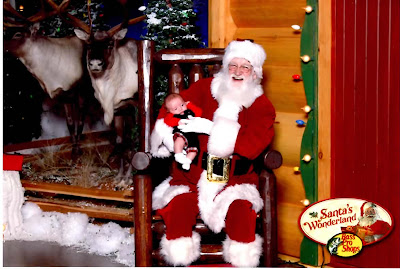 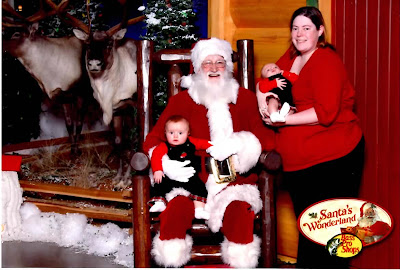 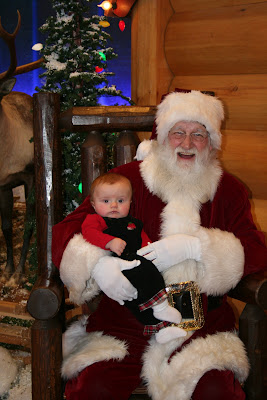 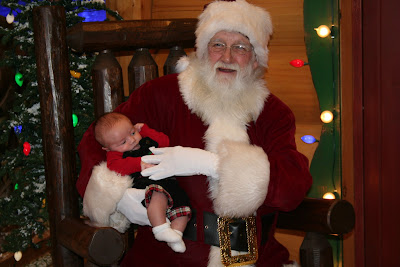 After we got the pictures taken - we let James explore a little bit. They have some giant fish tanks there in the store, so we let him look at the fish. I explained to him that Daddy would take him to catch fish like this as soon as he was big enough... but not to expect Mommy to eat them... because she doesn't do seafood. 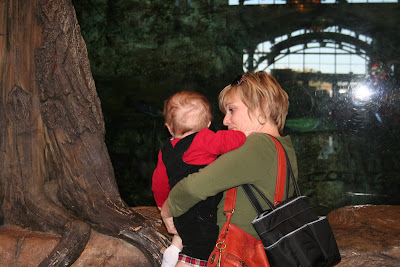 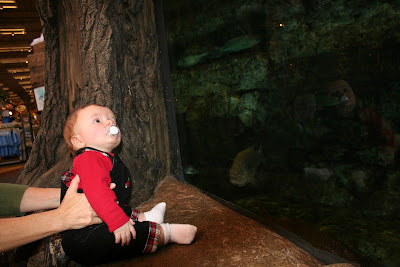 We then walked around and did a bit of shopping - it was great... I think James enjoyed having so much new stuff to look at. He really didn't fuss at all. We stopped somewhere around the middle of our loop around the mall and had a bottle, but he really was super happy. I love it when things work out like that!

Somewhere close to the end of our excursion - we came across the Rain Forest Cafe, so I let James check that out a little closer - I can't wait until he's a bit bigger and we can go in and eat to see all the other stuff. We just played outside the entrance where they had an alligator and an elephant that moved and made noise. He really seemed to like that and was very interested in what was happening with the animals. I guess it's about time to take the boy to the zoo... oiy! 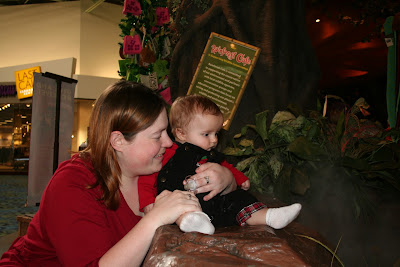 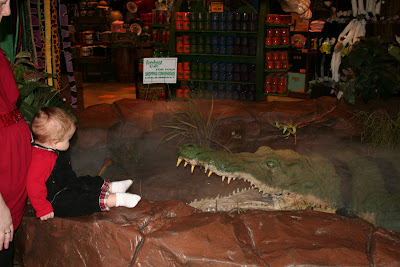 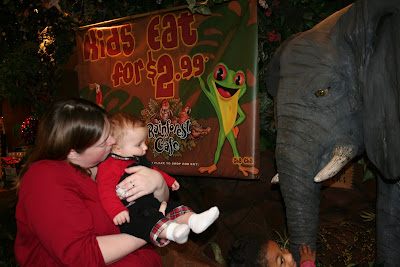 Our first trip to the mall was a huge success - I couldn't have been more pleased with how the boys handled it, and certainly enjoyed getting out of the house for a bit. Teething has been kicking our butt lately and the illness stuff has been too - so it was a real treat.
Posted by Kim H. at 9:31 PM
Email ThisBlogThis!Share to TwitterShare to FacebookShare to Pinterest
Labels: Family, Holidays