I thought that I'd share a few things that we're loving in our house these days... I need to get better about buying cheaper options, but I'm desperately trying to get them to eat anything that they will actually ingest. So that makes food a challenge.

At least as far as James goes... he really won't eat much in terms of meat... so I'm improvising as much as possible. He will literally only eat all beef Bologna, and sometimes all beef hotdogs... I'm trying to get him to eat other things, but it's a slow process.

Tyler pretty much will eat anything. 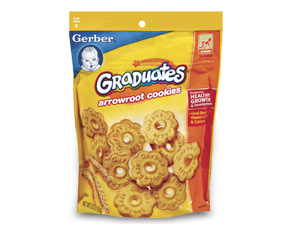 We have been using these as their dessert, but Tyler has been throwing up every time I've given them to him lately... so I'm laying off. I'd give them 1 a piece, and James will gnaw on the whole cookie - for Tyler I'd break it into pieces. As I said though, lately he's been having some coughing issues while eating them which then leads to him losing his whole dinner... and quite frankly... I'm tired of cleaning up vomit for the time being. So they'll just be for James... and Ty can have applesauce or something else. 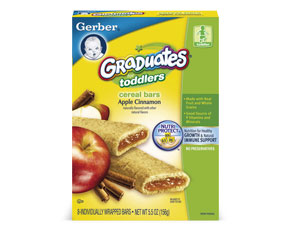 I bought these for James to try for breakfast sometime - haven't given them to him just yet because right now he has to eat a lot of starchy food so that he can take his medicine and it not make him sick... so once we're done with his meds - I'll give him these to try. 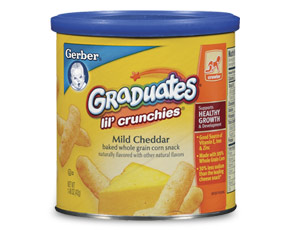 James absolutely loves these - they're like baby cheetos... he loves the cheese and the veggie dip flavor. I there is another tomato flavor and a maple flavor. We've given him the maple ones before, and then he smells like a waffle all day - for some reason that smell just stays on his hands all day long - so I prefer these and the veggie dip ones. 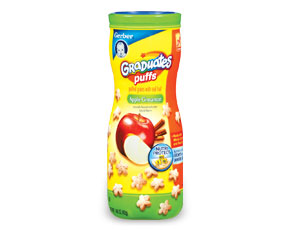 We go through Puffs like they're going out of style around here. Tyler LOVES them - and truly, it's about the only way I can focus on feeding one of them at a time... I throw some of these on their tray and let them snack while watching Sprout. It exposes them to some shows beyond Baby Einstein, and keeps their attention... but we go through lots of Puffs... we like the Apple Cinnamon, Strawberry, Cherry, and Banana best... but they also will eat the Sweet Potato ones. 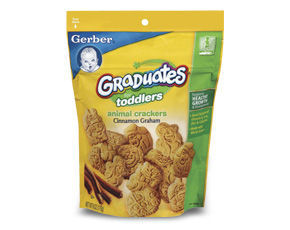 I bought these when I got the cereal bars, and about the same time Tyler started not being able to handle cookies anymore... so they haven't had too many of them, but they are Cinnamon Graham crackers - and they look GREAT. Once we get through these though, I'll likely just start buying regular graham crackers or the Goldfish version. They do really well with Goldfish because they're small and they love picking things up - so I'll probably start with those until Tyler is ready to have things like this again. 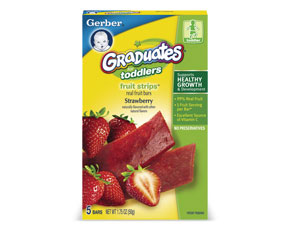 I got these for James too - to go along with the cereal bars, he hasn't had them yet... but I'm going to cut one up for him to eat with his lunch today. I could probably give him the whole thing, but at least until he gets used to it - it's easier for me to cut them up for him. 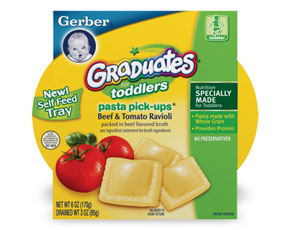 Tyler has been giving these a whirl... he loves them. James did too when he was younger. We've done the Beef & Tomato ones a couple of times. He's also had the Chicken & Carrot ones, and I got him the Turkey Vegetable ones today. We've also got the Spinach & Cheese version as well. 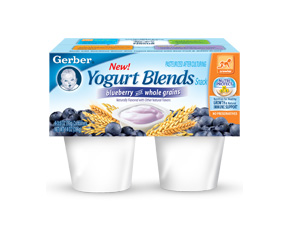 I bought these, they're new... they've got the Blueberry and they've got Apple Cinnamon as well. I got these because it's one way to mix James' medicine in and get him to take it without fighting us... but I like to give them yogurt, and the little bit of extra grain is always good too. My main reason though initially was because of James' medicine and the need for him to take it with starchy foods - this seemed like a great option. They really enjoy these two flavors as well though. 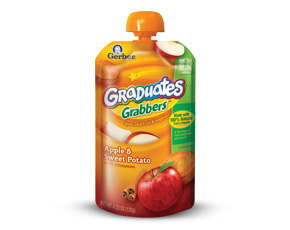 I bought a couple of these to keep in our diaper bag - for emergency snacking purposes - this is Apple Cinnamon & Sweet Potato, but I also got Banana & Blueberry as well. I've been caught a few times with nothing to give them while we were out and about - so I'm hoping that this can be an option to get a little something into them if we are running late to a meal. 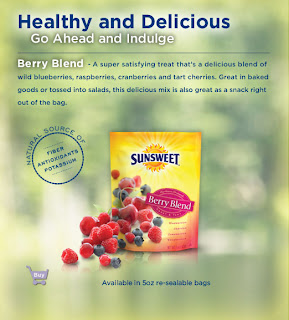 James LOVES raisins... so I got him these berry raisins - it's raspberries, cherries, and blueberries mixed together. He seems to be enjoying them. But they were like $5.25 for the bag. Now, he's been eating on them for over a week... but that's still fairly pricey. I'm not sure if I'll get them again - or go back to the little boxes of raisins, but it was a way for him to try something a little different. I might get a different version and just keep mixing them with regular raisins - a little expensive to go with our reasonable. He loves fruit, so I want to encourage him to eat things that are good for him. 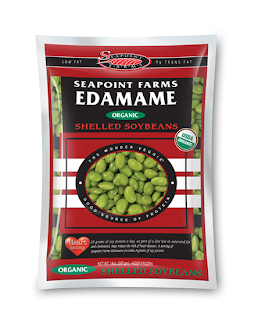 I mentioned earlier that James is in a little bit of an anti-meat phase... I'm not sure what the deal is, but he LOVES these. I was having them one day for a snack and of course the little beggar wanted some - so I let him try them. Right now he will gobble them off his tray faster than anything else. At 8 grams of protein per 1/4 cup - I'm running with it. We bought him three more bags of them today. I also saw on this company's website that they have little individual packs of them branded with Dora and Spongebob... I haven't seen those in our store, but what a great idea. Not the cartoon thing, but the little individual bags would be great! 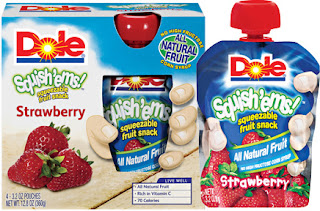 I was looking around the web for the berry raisins, and couldn't remember the brand - and was too lazy at the time to get up and go look... so I was looking around the Dole website, and found a few products that look like they'll be making their way into our house soon. I saw these, they've got three different flavors - apple, strawberry, and a mixed berry... if these are cheaper than the Gerber ones - I'll be getting these instead. I think they'd be great for adults too... as a snack that is quick and ready to throw in your bag for the car or whatever. 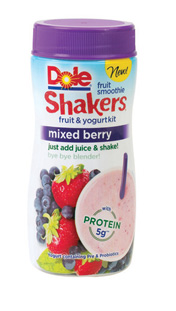 I'm going to have to look in our freezer section for these - there are a few different flavors of these as well, but I think these would make a great breakfast for me... so I'm going to pick up one or two to try when I go to the store on Monday.

Lastly, I saw these on their website... they've got strawberries, blueberries, and pineapple. Supposedly you can eat these like real fruit use in smoothies, or whatever. If it's like having real fruit though, that's a great option for us to have so that the boys can have blueberries, strawberries, and pineapple when they are out of season. Also, though we don't go through them that fast - so it might be a good way to always have them on hand and not waste so much fruit. I'm going to look around and see about getting some to try.

I'm in the process of getting a membership to Costco, and trying to overhaul how I shop for groceries... so any good budgeting tips you might have would be greatly welcome. I want to keep our meals changing so that we don't get bored, but also want to cut our spending too. So I'd love to hear your tips!
Posted by Kim H. at 1:05 PM
Email ThisBlogThis!Share to TwitterShare to FacebookShare to Pinterest
Labels: Food News, Mommy Diaries