Our day yesterday started out fairly normally. We got up and had our breakfast, bottles... and headed out to run an errand. I saw on Twitter from a friend the day before that Sonic was having 2 happy hour time slots - so I was excited to go check our early one out... only to find out that it's not happening here. BOO!

We went on to Kroger to get the milk we needed. Can I just tell you that we now go through 3 gallons a week of whole milk?! It's insanity - but cheaper than formula... so I'll take it. I just look like I'm feeding an army when I go to the store. Maybe I should just buy a cow for the backyard?

Here are the boys while on our trip in Kroger... 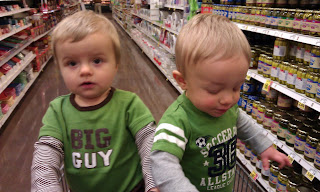 We were home by a little after 9 - so they had their bottles, and were super fussy - so instead of trying our new nap time from earlier in the week... I put them down at 10 for our old morning nap time. They slept better! We had been trying to stay busy until lunch around 11 and nap by 12... but James was only sleeping for an hour and at 18 months - that's just not enough nap to get us through the day. When he does the 10AM nap - he will sleep for 3+ hours! We'll keep that! I just need to get Tyler to only do 1 nap at 10 and we'd be set.

Our afternoon and lunch time were incredibly fussy yet again, and I even tried a new activity with them that I got off of Pinterest. That will be another post for next week, but when Momma starts losing her cool... it's time for a break. So I took the little stinkers back up for afternoon naps. I knew James likely wouldn't sleep, but typically he goes up and quietly plays while Tyler naps. I settled in the kitchen to bake up some more of my Candy Corn Cookies - because John loved them.

Everything was going smoothly, and I got the cookies baked. I looked at the monitor when they were finished to check on James, and all was well. I brought the monitor into the living room to sit down for a minute... and noticed that it looked like the back of our crib was coming apart... so I literally darted/sprinted/ran up the stairs to his room... and found him dangling in the back... and this was what the crib looked like. 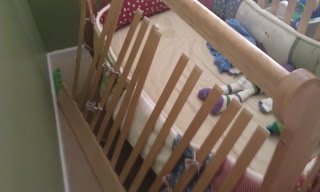 I still have no words, and no clue how it actually happened... but I was so angry about it - I brought him downstairs and had one of the worst ugly cries I've ever had. Literally sobbing and wailing. It was one of those days that I was questioning what in the world I prayed for all of those 8 years... but as with most bad days - it seemed worse in the minute than it really was. He was safe... we are all fine. The crib was fixed before bed, and all ended up just fine.

I'm grateful to my ladies on Twitter for talking me off the crazy cakes ledge yesterday... because I was teetering for a few minutes. Today though, we're having a good day...and the boys are making each other giggle a lot - which in turn makes my heart almost burst with love. Tomorrow, I'm having some "me" time with a haircut and some time to just walk around the mall alone. Maybe some preview Christmas shopping... I don't know - but it's absolutely needed so I can regroup a little bit. I'm still holding out hope that John will suggest a pedicure too :-)