I was browsing through Pinterest one day, and saw something that I just thought was BRILLIANT. Ok, who are we kidding? I think it's all brilliant. Anyway... someone had made a craft item that they hadn't officially named, so I'm giving it a name as I recreate it. Let me introduce you to the "Memory Calendar" - for someone like me (read: super sentimental) this was SO up my alley.

It is super easy to make, and you don't have to be crafty to pull it off. Now, I know some of you could come up with way cuter things to do with this, but I was looking for something timeless. My initial thought was to make one of these for our family... but then I took it a step further. I decided that I'd make one for each of the boys (and hopefully their future sibling as well) to have as a keep sake someday. Personally, there is nothing more meaningful to me than getting the gift of a handwritten item to keep forever - with the idea that the item will live on even when you are not.

So my hope is to keep this going for each of our children throughout their childhood - then at some point to be determined in the FAR future... it will be given to them to keep. (If I can ever part with it!) Can you imagine becoming a parent - and receiving the gift of a daily memory of your life from your parents' eyes - featuring every milestone and achievement in your life? Granted I'm about a year and a half behind on both boys - but that's not too far behind to get started... and I'd encourage anyone with older kids to get started wherever you are now... if that's something you feel lead to do.

Let me explain what this is as we look at it through pictures. In the end, I've started making 3 of these. One I'm giving as a gift this Christmas - and one for each of the boys. 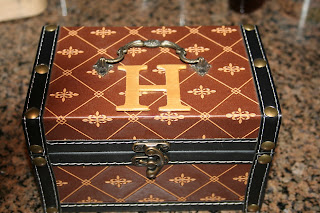 Here is the box that I am using for each of them - I bought them at Hobby Lobby for $9.99 - but even got it at 50% off. Very affordable. I then took a chip board letter for part of their initial... painted it with metallic gold paint and glued it to the box for a little added personalization. I could see this being just as cute painted black or a more bronze shade of gold too. 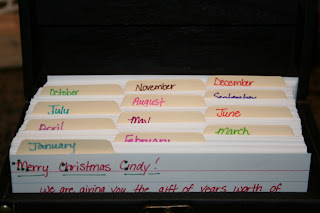 I headed off to Office Depot for the rest of my supplies. The example that inspired me from Pinterest used a date stamp for each day of the year, but I wanted to use a different color for each month of the year. My choice there either meant buying 12 different stamp ink pads OR coming up with another solution. I found a set of fine point Sharpie markers that had 24 different colors included (I think) for a reasonable price - so I opted to hand write each card.

I chose to use 4x6 index cards, and bought a pack of 300 for each box I was making plus one additional set of 300 to fill in the remaining days of the year. For the dividers - they didn't have blank dividers at Office Depot - so I bought a box of those from Amazon.

When it came down to it - I actually had to cut the cards and dividers with a paper cutter to make them fit in the box. The cards will still have room for about 11 years of memories on the front, but they were just a bit too tall for the box. I think I cut off a line and a half or so of the card - but that was just my planning. So if you'd like to avoid the cutting - maybe go with the 3x5 sized cards and dividers. (Just know there will be a little less space to write your memories.) 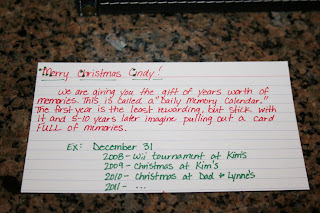 I wrote this note to the recipient of our gifted box this year... and it shows an example of what the concept behind this calendar is... basically - you make a card for every day of the year (include February 29th too!) then you write a memory for that day every year. The text in green kind of gives an idea of how it would look. The first year would be the least gratifying in the process - but think about every year after that writing down your memory for that day while also being flooded with the memory of things that happened that day in the years before. 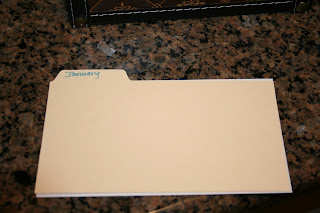 I made a divider for each month - and for my boys - I took it a step further, which I will show you later in this post. The recipient of our gift box is VERY crafty... so I think that she will follow our lead on this and make it a project for herself or for her daughter. Which I think will make their box more personal to them. 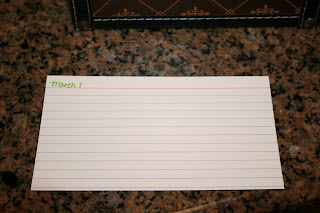 I made a card for each day of the year... (three sets... a LOT of writing!) So on our January 1st card - we will go to the second line of the card and write "2012 - <insert special memory for that day>" but be sure to only use the first line... then you'll go back on January 1st 2013 and fill in the next line with that memory. The idea is that you do it everyday. 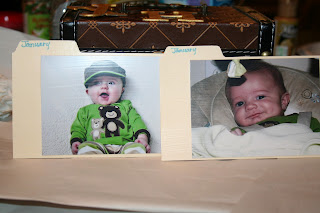 For our calendars - I took our January dividers and modge podged a favorite photo from their first year of life. I will do the same for February with a favorite photo from 2011. Then each year from here on - I will take the next month and put our favorite photo of each of the boys... when we get through December - I will turn the dividers over and start on the back. My goal is that when they receive the box - it will also have a photo for each year of their years growing up.You could absolutely just choose your favorite 12 photos of your family right now - and use those. It's not like you can't make different dividers over the years. (They come in a box of 100 after all!)

I initially thought of making one of these for the ladies in our family with young kids - but then thought about the time it's taken to make them - and the true feasibility of them actually using it... and I think there is one other person in our family that would use it... but I'm just going to tell her that if she'd like me to make her one - I'd be glad to do it in the new year... and she can just start writing her stuff in a notebook for now.

I am so proud of how these turned out, and I can't wait to start filling ours with memories for the boys in a couple of weeks. It will just be something they grow up with watching me fill out everyday - and I think that will make it special too. A new habit of creating a special gift for our precious miracles.
Posted by Kim H. at 8:00 AM
Email ThisBlogThis!Share to TwitterShare to FacebookShare to Pinterest
Labels: Craftiness