What happens when you take two toddlers to the mall and reward them with a ride on one of those little pay-per-ride machines? Let me indulge you with a story, mkay?

So, my mother in law (Betty) and I took the boys to the mall for a little outing and to get them outfits for some portraits that we were having done the next day. We walked in and immediately got the outfits - then decided to let the boys walk around the mall for a bit because it wasn't busy and they needed to burn off some energy. James pushed the stroller through most of the mall and Tyler walked with MawMaw.

We got about half way through the stroll around the entire mall, when we saw this ride... and MawMaw thought it would be fun to let the boys ride. They'd never gotten the chance, so I agreed. 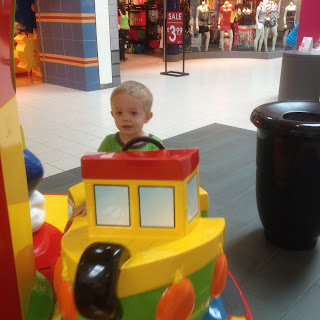 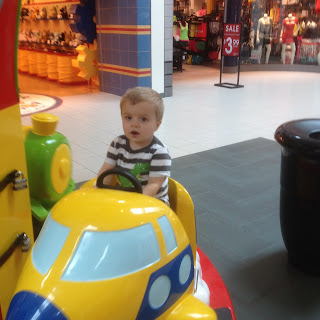 Only, when the ride was complete... in typical toddler fashion... there were tears that we had to leave the ride behind. Tyler of course recovered decently with the distraction of a sippy cup and some snacks. Which he happily enjoyed in the stroller on the way to the car. James, on the other hand, threw the mother of all fits. Literally, my mother in law carried him through the mall and to the car while he was screaming the entire time.

I know some of you can relate to this scenario... only it gets worse. While loading the boys into the car, James is screaming so loud that he gets the attention of a cop patrolling the parking lot. The cop comes over and pulls in to ask me if everything is alright. Seriously?! Have you never met a 2 year old?

I get that they have to be cautious, but wouldn't you think that someone kidnapping a child would be in a hurry? Or someone beating a child would be less calm about loading them into the car and getting out of dodge? I mean I literally was taking my time loading them in the car to head home... mainly because, I didn't want to be trapped in the car with all that screaming either. HA!

I satisfied the cop enough for him to drive away, offered the boys a Sonic slushy if they chilled out, and off we went. We didn't get a slushy that day because James cried the entire 15 minute ride back to the house... but immediately went up for a nice LOOOOOONG nap. He then proceeded to wake up perfectly happy and go on with the rest of his day. 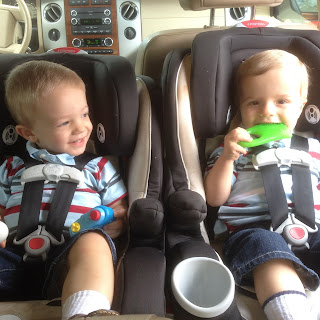 Just because they're cute - I thought I'd include a shot of them on the way to the mall for their photos with their grandparents... and a few individual shots as well... they are so cute - I can't wait to get the CD back next week. 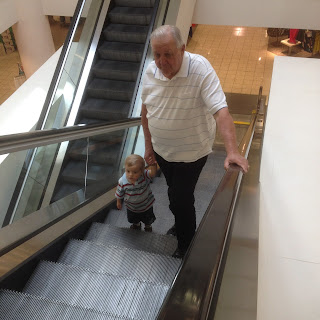 While there, James took particular interest in the escalators - so being the sucker that his PawPaw is... he got to take his first, second, third, fourth, fifth, sixth, seventh, eighth, ninth, and tenth ride on one... they just kept making the loop. 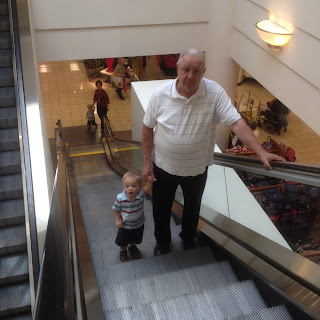 We got MawMaw in on the loop too, so Tyler got to ride about the same number of times... they were so cute! 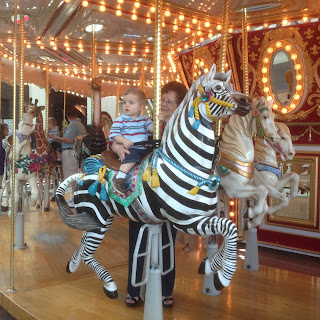 We also let them ride on the carousel, which luckily did not have the same reaction as the previous ride... he didn't mind getting off because I think the rising zebra scared him a little bit. 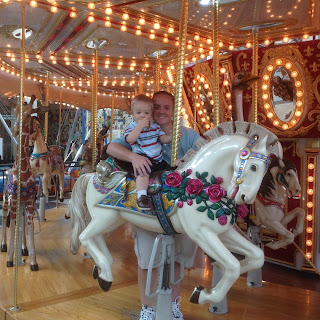 Sweet little Tyler enjoying the carousel as well. He is so funny - I think he's just happy to go and do anything you want to - no matter what it is.
Posted by Kim H. at 7:30 AM
Email ThisBlogThis!Share to TwitterShare to FacebookShare to Pinterest
Labels: James, Tyler