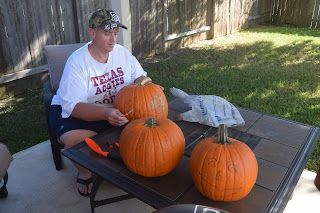 We carved our pumpkins last Sunday, we typically wait until the last minute due to the temperatures here being hot and muggy... our pumpkins were already significantly moldy when I tossed them in the trash on Tuesday night. 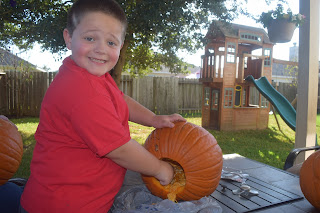 Tyler got into helping clean out the pumpkins this year -- he did his fair share of scooping out the "guts." Boys!

James was more interested in trying to holding the pumpkins, which of course is a fast track to cracking it when it gets dropped. This almost always happens, but this time it didn't. 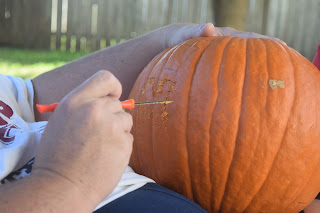 Daddy is our chief carver, although, I do try to help out when I'm allowed. In the picture shown, he was trying to work on the Texas A&M pumpkin. 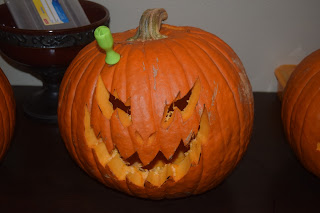 Tyler's pumpkin didn't show up with the knife in the head when it's lit up in the dark. We put that there because there was a blemish on this pumpkin, so we thought this would be a funny way to make that work with the design. 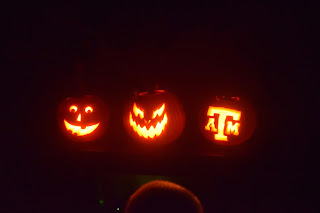 I put them all on the entry table and did our big glowing pumpkin reveal. We leave them in the house until just before trick or treating, again trying to get as much longevity out of them as we can. It's like 80 degrees here on Halloween -- so you do what you gotta do. Just once, I would love a nice cool Halloween... but this year we were prepared. 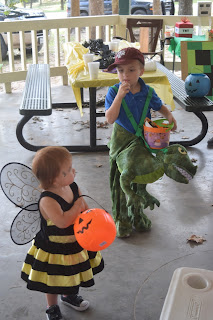 James wore two different costumes this year because we had a homeschool picnic with some trick or treating earlier in the day. All of the kids dressed up and went around to each table for some treats. James was in his dinosaur costume from 2 years ago. This guy... he grows taller, but no bigger in the waist... so I let out the straps and it fit him JUST fine! 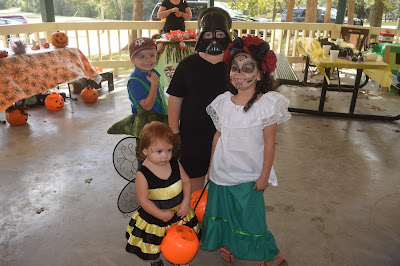 (Clockwise) James, Tyler, Grace, and Kadence... Grace is the first name that comes to mind in our house when you ask, "Who is your best friend?"  I try desperately to explain that their brother is their best friend, and that your brother is the only person that will know all of the craziness that went on with you while growing up... and will still stick up for you. 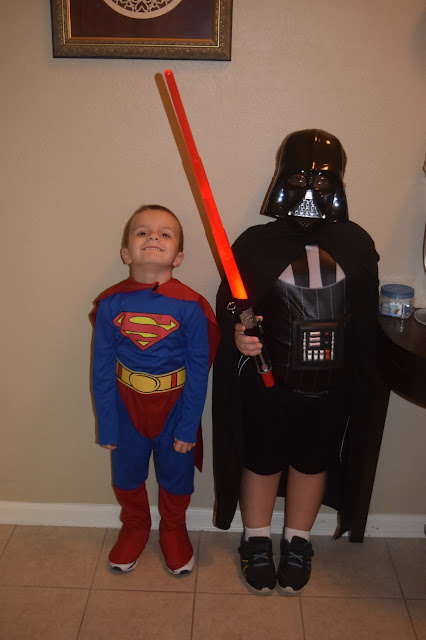 For our nightly trick or treating... let me present -- Superman and Darth Vader! Tyler dressed as Darth Vader for the picnic earlier too, but he wore a different shirt and no cape. We had him wear shorts this year for trick or treating and it seemed to be much more successful than his Ninja Turtle costume debacle from last year. He was so hot after going around our block that we had to quit trick or treating and just hand out candy at our house.

A good time was had by all... I'm so glad that they enjoy all of this -- it's so much fun too see them dressed up and going house to house. Thankfully Daddy was home this year and was able to go around with them while I sat in the driveway to hand out candy to the masses.

I saw the CUTEST baby costume -- they dressed this baby girl up as a Cabbage Patch Doll, and her stroller was decorated as her "box" -- I mean, so cute and clever!

Posted by Kim H. at 6:12 PM
Email ThisBlogThis!Share to TwitterShare to FacebookShare to Pinterest
Labels: Holidays